Admiral Frederick Moore Boultbee commissioned five almshouses to be built on land he had purchased from Joseph Payne in January 1871 for £120. Emery Down Cottages comprise five dwellings in the centre of Emery Down, a village close to the New Forest town of Lyndhurst.  By 2009, it was apparent that the cottages were in urgent need of modernisation.

The aim of the Trustees was to restore these prestigious Grade II listed cottages and this was achieved through an excellent design sympathetic to the rural setting and the environment of the New Forest and the Victorian heritage.

Trustees embarked on an exciting remodelling scheme in order to provide the best possible accommodation for their residents.  High quality materials and workmanship were used throughout the project.  Thanks to the generosity of the Charity’s  Chairman and her husband, a parcel of land to the rear of the almshouses was given to the Charity to enable them to provide rear extensions.  This has led to the provision of new kitchens and bathrooms, a much improved internal layout in each cottage, and sufficient space for modern living.  The gardens have been laid to lawn, and pathways improved.

From the outset, a significant challenge was funding, and there were periods in the process when Trustees felt that completion would be unattainable.  However, following a very active local fundraising effort, the Charity raised £65,000.  It was evident that the local community recognised the value of almshouse accommodation, and the historic importance of the almshouses themselves.

Not only did Trustees embark an ambitious project despite some significant financial risk but they produced a design which is impressive from an architectural perspective, practical and which will give the Charity a new lease of life.


This charity was founded in 1670 by the Will of Sir Robert Christopher, a wealthy landowner in East Lincolnshire.  The original almshouses were probably timber framed and lasted for approximately 200 years.  In 1870 the present brick and slate buildings were erected.  In the early 1960s bathrooms were added and the 6 units were converted to provide 4 larger dwellings.  The building is listed Grade II and in a conservation area.

It was understood that major structural works would be required.  The almshouses had very tiny kitchens and inadequate heating and ventilation.  Trustees faced a difficult decision as to whether to close the charity or to take on a huge project to revitalise the building.  The decision was taken to increase the size of the units by building rear permitting a much improved internal layout for residents.

New double glazed windows were provided in the rear extensions and the original floors, walls and roof received further insulation.  New fitted kitchens and bathrooms with non slip flooring were provided with low energy boilers and low energy lighting.  Kitchens are now open plan and have plenty of natural light.

Within the extension there is great use of ceiling windows in the new pitched roofs making the interiors light and airy.  The bedrooms have fitted cupboards all shaped to fit into the pitched roofs and with appropriate doors and fixings.  The extensions were designed to use the same traditional materials as the existing building.

This project has brought back to life these virtually derelict almshouses.  The charity now provides excellent, modern and comfortable accommodation for their residents.

The eye for detail which has been included by the architect to return the frontage of the building to its original façade and include so many features from the original design into the extensions has been remarkable.


The origins of the charity can be traced back to the 17th Century although Devizes Almshouse Charity in its present form dates from 1904.  Prior to the new development the Charity had 56 dwellings of which 51 were on the main site with the remaining 5 at two other locations in Devizes.  Trustees have a strategic aim to acquire surrounding properties to be able to provide further almshouse accommodation for elderly people in Devizes.

The design included level entry for wheelchair users and extra wide front doors with a covered porch, wide internal doors, an extra large shower room and a large hall where buggies could be stored and charged.  A high standard of insulation to walls and ceilings has been included and energy saving boilers and radiators are installed.

The site has been designed so that lounges are facing south so residents can enjoy the outlook and their terraces.

Trustees have also added a feature building to be used for extra storage and as a communal area for residents to sit under shelter in good weather and look onto the gardens.

This Charity isvery keen to provide the best possible accommodation for local residents.  The new bungalows exceed normal space standards and are light, airy comfortable homes which can easily be adapted as residents become more frail.


Founded by Thomas Christie, a 17th Century Bedford lawyer who built 8 small almshouses in the centre of Bedford in 1682.  Between 1964 and 1968 Christie House was built as a semi-circular Queen Anne style building with 17 flats.  In 2008 The Thomas Christie Charity merged with the John Crosse Charity which had property just outside Ampthill.  This property was sold and the funds enabled Trustees to develop the plot of land adjacent to Christie House.

John Crosse House is a brand new purpose built almshouse comprising eight flats for single or double occupancy plus one studio flat.  There are three communal rooms, a large hall with adjacent kitchen, a quiet room and a rooftop garden.

The flats were designed to be spacious, light and airy.  Fitted kitchens have been provided and all have natural light.  Bathrooms have been lined with plywood so that should the need arise for grabrails etc, these can be easily fitted.  Level access showers have been included and doors to bathrooms can be opened both inwardly and outwardly – one of the recent features recommended by the Almshouse Association.  Underfloor heating is provided and the building has solar panels.

Stairwells are a feature of the building and huge windows in the hallways give a feeling of space.  A roof garden has been provided where residents can sit out to enjoy good weather.

The new hall is used by residents of both Thomas Christie House and John Crosse House and is much appreciated.

The charity is in a Conservation Area and there were constraints placed on the design of the new building.  There are many lime trees in the grounds which are the subject of TPOs.  The design has attempted to reflect the scale and detail of the existing Victorian buildings in the adjoining road but also to blend in with the current 1960s Thomas Christie House.

This project has taken many years to come to fruition and trustees have been determined and resolute in providing the best possible accommodation for the elderly in Bedford.

▲ MAIN PICTURE ABOVE: Emery Down Almshouse 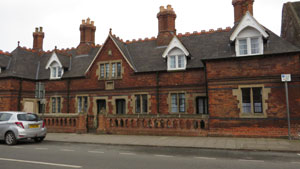 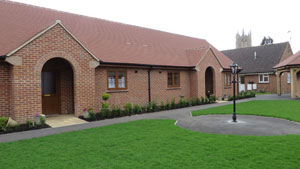 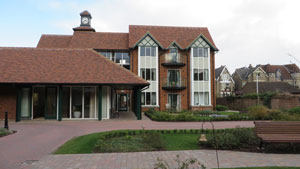 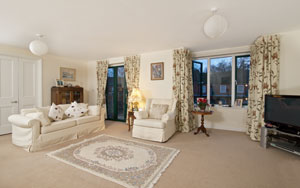