Three almshouse charities were selected by HRH The Prince of Wales to receive the Patron’s Awards for projects completed in 2017 – The Davenport Homes, Shrewsbury’s Drapers’ Almshouses and Amersham United Charities


The town of Old Amersham in Buckinghamshire has two groups of Almshouses, the 17th Century Drake’s and the 19th Century Miss Day’s. The former, built in 1657, is a Grade 2 * listed building, and the latter, built in 1875 is Grade 2 listed. Both are managed by Amersham United Charities set up under a Charity Commission scheme of 1999.

All dwellings are for single occupancy only, and the objects of the charity are that applicants must have limited financial means and may be either male or female. There is no age restriction.

In 2013 it became apparent to trustees that the Miss Day’s Almshouses were very cramped, and in rather poor condition. They had steep, rickety staircases that began in the kitchen area and curved around leading to a tiny bedroom. The floors were uneven and dangerous, kitchens and bathroom facilities were very unsatisfactory. Sound transmission and thermal performance was well below reasonable standards.

There were protracted discussions with the Conservation Officer and Buildings/Control to see what would be permitted. Several suggestions were put forward and residents were consulted throughout.

Trustees settled on a plan to convert the 9 very small dwellings to 7 larger almshouses. There was to be no impact on the front elevation of the building. Some extension at the back would be possible at one end of the site, but the shape of the space at the back prevented extension along the whole length.

The site has a very small pedestrian only passageway from the High Street and all equipment had to be taken to the site manually as no lifting equipment could be brought in.   All services had to be brought in under the passageway including water and electricity – new mains had to be installed and a party wall had to be partially rebuilt.

The flank wall at the far end of the building forms part of the river channel so scaffolding had to be constructed in the river alongside the almshouses for part of the work.

The interiors were completely remodelled with the two dwellings nearest the river having kitchen extensions and the remaining properties having an interlocking design which enabled the provision of a much larger bedroom and a shower room upstairs. Ample power, telephone and TV sockets were installed at heights where elderly residents do not have to stoop to access. The winding staircases were removed and new, straight, staircases were installed at the front of each dwelling designed to accommodate a stair lift if necessary.

Residents were consulted on the internal fittings provided and were given choice on kitchens and bathrooms, colour schemes and carpeting, all provided by the charity. A downstairs toilet was installed and there is now plenty of storage space.

The memorial tablet on the front of the building was lightly re-carved and is now clear and easy to read.

The buildings had no thermal insulation and little acoustic separation. Trustees worked very closely with the contractor and retained control of the quality and detail throughout the project. New secondary glazing windows were installed providing a light and airy feel to the dwellings.

Energy saving measures were put in place including much better thermal insulation and acoustic separation. A communal gas boiler was installed which is energy efficient and cost effective for residents.

The front of the building has a beautiful, private garden area which ends at the riverside. Residents are encouraged to look after a small area if they wish to do so and the charity employs a gardener to look after the common area and also to give advice and assist residents with their own areas.

The building is Grade II listed and the project was subject to constraints placed by the Conservation Officer. Trustees were not allowed to remove the fireplaces and many residents now use these as a feature of their living area.

Considerable care was taken to ensure that the character of this beautiful listed building was retained. The exterior has been improved by the removal of unsightly soil pipes and the electricity supply being taken underground.

The design to extend the very small dwellings by extending where possible and using an interlocking design between the remainder was innovative was skilfully executed in challenging circumstances.

The setting of the almshouses is a lovely oasis set just off the main High Street of Amersham, a very secluded and private location. The gardens and views are spectacular.   The transformation of these dwellings, from very tiny dark, rooms to delightful, light and airy spaces, up to modern standards of thermal and acoustic performance was a joy to behold. Above all the work has enabled the community spirit to thrive here.


Davenport Homes was set up by Frank R Davenport in 1935. Originally for women in domestic service, such as maids, cooks and housekeepers who found it very difficult to find somewhere suitable to live upon retirement as they had been provided with accommodation as part of their job. Mr Davenport bought land in Solihull, erected 20 cottages and left assets to provide an income for the charity. Permission was sought from the Charity Commission to widen the objects of the charity and the charity can now appoint couples and single men who qualify. Trustees were keen to replicate the best of the design elements of the original cottages, retain a traditional almshouse quadrangle format and also incorporate the highest standard of modern facilities. A feasibility study was undertaken to provide 12 one bedroom cottages, to include landscaping, car parking and improved access to the site. Trustees wanted to provide a community room which would open on to gardens to give a focal point for socialisation and have all front doors open into the quadrangle, again encouraging social interaction. The new bungalows are bright and airy with very high windows and patio doors leading out to a garden area. Rooms are spacious and light with much thought going into the fixtures and fittings provided by the charity, especially in the kitchens.   Each unit has a double bedroom, lounge/ dining room, kitchen, store room and wet rooms. All walls, floors and ceilings were installed to a higher standard than required by building regulations. The bungalows are wheelchair accessible, each with low level window sills for easy viewing from chairs, appropriately located electrical sockets and switches. Natural ventilation is provided and solar gain will be reduced through the introduction of landscaping to provide shading in order to limit the potential for overheating. The construction materials are from sustainable sources. The existing Almshouse arrangement creates lovely landscaped quadrangles and this characteristic has been adopted influencing the placement of the new cottages and helping to anchor the new development.


The Shrewsbury Drapers Company began life as a Guild in late medieval times. Trustees felt that there was a need in the area for further almshouse accommodation and they owned land adjacent to an older set of almshouses and felt that this could be used to double the number of dwellings they were able to offer to local people in need.

There were a number of design challenges for Drapers Place and the costs were high due to the need for flood prevention. The neighbourhood is part of the River Severn floodplain, resulting in the main building requiring to be raised by an additional level.  The site lies to the north of Shrewsbury Abbey within the Shrewsbury Town Centre Conservation Area. The significance of the Conservation Area is recognised as a heritage asset and it was vital that the proposals for this site complemented and enhanced the environs.

The project was to create a high quality development for elderly and vulnerable residents in this historic location on the outskirts of Shrewsbury town centre. The design was revised and refined during many months of consultation with the planning officers of Shropshire County Council together with the various consultees from other Shropshire departments and national bodies.

The design of the building is clear and logical for residents and visitors. Ramps lead from the parking level to the central main door. The entrance is in the middle of the building and is inviting and spacious. Internal corridor lengths are minimised making the building both disabled and dementia friendly.

Each apartment has plenty of natural light with large windows and a private balcony to be able to sit outside in fine weather. Kitchens are a very good size with excellent fixtures and fittings and all flats have good bathrooms with level access showers. Particular consideration has been given to the use and cost of energy, good ventilation and noise insulation between apartments.

There is access to frequent public transport nearby and Shrewsbury town centre with a range of shops, restaurants, social and leisure facilities is just a short walk away. There is a superstore and cinema complex within walking distance of the almshouses.

The building is arranged around a landscaped area and an important wildlife green corridor. Each floor has a communal sitting area and there is a Hobbies Room and a large community lounge. Each of the four wings has a different colour scheme to enable easy navigation around the building.

The building is easy to maintain and has used traditional materials and building techniques. It has been designed to be able to respond to changes and will be serving residents for a very long time.

The end result has been a very attractive building with good aspects and the eradication of the need for a large, potentially unsightly car park by utilising the space under the building as an under croft car park. The design has responded to the demands of its location and ensured that the historic context is respected. The views from the old town to the west are distinctive and have been preserved well. 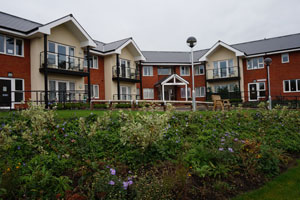