What role is there for almshouses in the 21st century?

There is a greater need for affordable homes today than ever before.  According to research carried out by Heriot-Watt University in 2019, 8.4 million people in the United Kingdom are living in an unaffordable, insecure or unsuitable home.

In our fast-paced modern world, people are also lonelier and more socially disconnected than at any other time.  A study by The Co-op and the British Red Cross revealed over 9 million people in the UK are either always or often lonely. Loneliness, living alone and social isolation can lead to dementia, heart disease, depression, and even early death. And the problems associated with insecure, unaffordable and unsuitable housing and the serious negative consequences of social isolation tend to be unfairly concentrated in those people who are already struggling and disadvantaged.  These are the people that the almshouse movement exists to support, in the heart of their local community.

“Many almshouse trustees are ready to build and although almshouses will never be the total solution to the housing crisis, they represent a great opportunity to expand very local affordable housing provision. The model is based on genuine affordability, independent living and residents’ wellbeing.

Over the last thousand years, almshouses, led by local trustees have offered truly affordable homes to the community and if ever there was a time to build more almshouses, it’s now!”

Almshouses are the oldest form of social housing with a history of over one thousand years. The oldest almshouse foundation still in existence dates from circa 990.

The Local Government Association (LGA), which represents more than 370 councils in England and Wales, warned that based on existing trends, the scale of elderly homelessness is set to double by 2025.

There are 30,000+ almshouse dwellings throughout the UK providing affordable homes for over 36,000 residents.

In 2021, a report commissioned by The Almshouse Association and carried out by Housing LIN has shown that the almshouse movement

“generates financial benefits to the social care and health economy of c.£1340 per almshouse resident, per annum”. In total, this equates to £43.2m every year!

In addition, the report highlighted additional benefits of:

Almshouses are owned and managed by a network of more than 1600 independent almshouse charities across the UK.

In some rural areas, almshouses are the only provider of affordable, community housing.

Appropriate housing can keep older people healthy, support them to live independently and reduce the need for social care.

Over 500 almshouses in the UK are listed buildings and part of our national heritage. Almshouses cannot be bought under a ‘right to buy’. They remain as a permanent part of the community in perpetuity meaning generation after generation of local people in housing need can live in a secure place they call home.

8.4 million people in the UK are living in unaffordable, insecure and unsuitable housing.

Heriot-Watt University, Scotland on behalf of The National Housing Federation – 2019

Almshouses are a part of the housing crisis solution, the case couldn’t be stronger.

“Almshouses are a unique form of social, affordable housing that predates modern forms by many centuries. Whilst unlikely to solve the housing crisis on their own, their unusual histories and constitutions mean they are not subject to the same land pressures as many housing providers, and they demonstrate means by which the planning system could better support innovation and the supply of affordable housing.”

The cost of poor housing to the NHS is estimated to be £1.4 billion per annum; of which nearly half (£624 million), is attributed to poor housing
among older adults

The Almshouse Association provides almshouse charities in the UK with support, guidance, grants, funding and representation to government. We receive no government funding and rely totally on the subscriptions of member charities, legacies, donations and the goodwill of others to continue our work.

At a time when there is a severe shortage of affordable local rental accommodation, the role of an almshouse charity is now more vital than ever.

Here at the Association, it is our vision for almshouses to be at the forefront of the community housing concept, providing an exemplar housing model for generations to come.

If you would like to discuss ways in which you may be able to support almshouse charities, please contact Nick Phillips, our CEO at nickphillips@almshouses.org.

Hear what our CEO and supporters have to say
Read More

Find out how almshouse living has changed lives
Read More 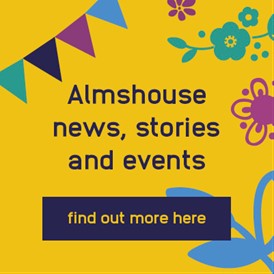